On behalf of the editorial team at The Political Methodologist, I am proud to announce the 2015 winner of the Annual Most Viewed Post Award: Nicholas Eubank of Stanford University! Nick won with his very informative post “A Decade of Replications: Lessons from the Quarterly Journal of Political Science.” This award entitles the recipient to a line on his or her curriculum vitae and one (1) high-five from the incumbent TPM editor (to be collected at the next annual meeting of the Society for Political Methodology).[1]

The award is determined by examining the total accumulated page views for any piece published between December 1, 2014 and December 31, 2015; pieces published in December are examined twice to give them a fair chance to garner page views. The page views for December 2014 and calendar year 2015 are shown below; orange hash marks next to the post indicate that it was published during the time period (and thus eligible to receive the award). 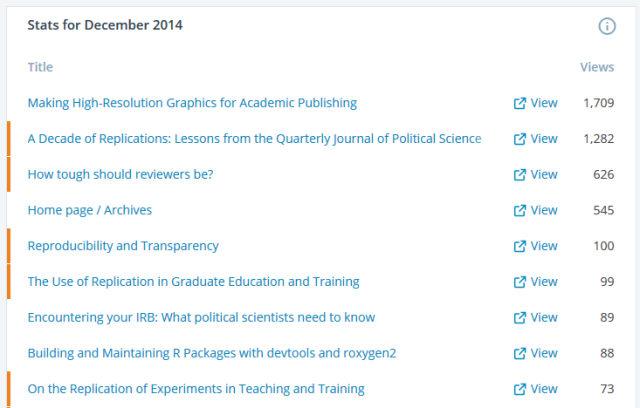 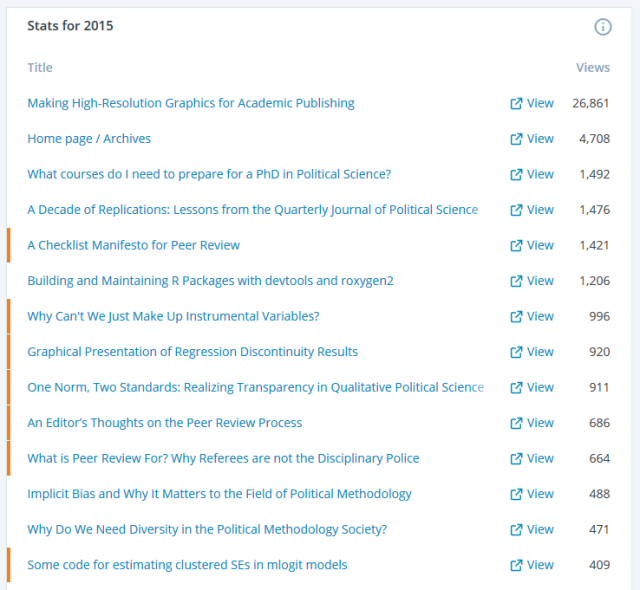 Nick’s contribution was viewed 2,758 times during the eligible time period, making him the clear winner for this year’s award. Congratulations, Nick!

Our runner-up is Brendan Nyhan and his post “A Checklist Manifesto for Peer Review” which was viewed 1,421 times during the eligibility period. However, because Brendan’s piece was published in December 2015, he’ll be eligible for consideration for next year’s award as well!

In related news, Thomas Leeper‘s post “Making High-Resolution Graphics for Academic Publishing” continues to dominate our viewership statistics; this post also won the 2014 TPM Most-Viewed Post Award. Although we don’t have a formal award for him, I’m happy to recognize that Thomas’s post has had a lasting impact among the readership and pleased to congratulate him for that achievement.

I am also happy to report that The Political Methodologist continues to expand its readership. Our 2015 statistics are here:

This represents a considerable improvement over last year’s numbers, which gave us 43,924 views and 29,562 visitors. I’m especially happy to report the substantial increase in unique visitors to our site: over 8,000 new unique viewers in 2015 compared to 2014! Our success is entirely attributable to the excellent quality of the contributions published in TPM. So, thank you contributors!

[1] A low-five may be substituted upon request.

Associate Professor of Politics and International Affairs at Wake Forest University.
View all posts by Justin Esarey →
This entry was posted in Editorial Message, The Discipline. Bookmark the permalink.